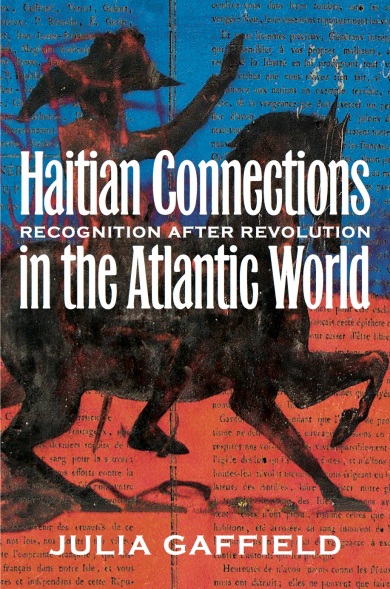 “Reena Goldthree (RG): Haitian Connections in the Atlantic World chronicles how Haitian officials constructed diplomatic, commercial, and military ties with foreign governments and merchants in the early nineteenth century. Your book joins a remarkably rich body of scholarship on the Haitian Revolution and on Haiti’s place in the Atlantic World. When did you first become interested in Haitian history? What books on the Haitian Revolution were most important to you as you embarked on this project?

“Julia Gaffield (JG): A class at the University of Toronto taught by Melanie Newton first sparked my interest in Haiti. The course presented a history that I’d never heard about and that until pretty recently wasn’t taught in high schools or even in undergraduate classes. That’s changing now, but over a decade ago that wasn’t the case. The class occurred at a time—during the 2003-04 academic year—when Haiti was in the international news because of the ousting of President Jean-Bertrand Aristide. So, I was simultaneously learning about Haiti’s history and learning about contemporary politics. This was a whole new world that I hadn’t learned about before and I just wanted to know more. The first book that I read about the Haitian Revolution was The Black Jacobins by C.L.R. James and then also Carolyn Fick’s book, The Making of Haiti.

“2004 was also the 200th anniversary of Haiti’s independence, so there was a lot of scholarly activity that year. It was the year that Laurent Dubois’ Avengers of the New World came out, followed shortly thereafter by John Garrigus’ Before Haiti. So it was a confluence of classroom experiences, contemporary politics, and then a burst of activity in the academic community that led me to study Haiti….”

Read it all: Haiti and the Atlantic World: An Interview with Julia Gaffield