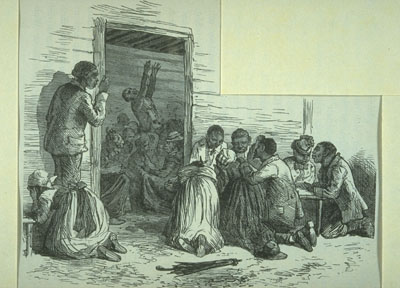 “The dioceses explored the legacy of slavery and racism in various ways, many of them involving screenings of “Traces of the Trade: A Story from the Deep North,” a film created by Katrina Browne, a descendent of the DeWolf family of Maine, longtime Episcopalians who were slave traders in the late 18th and early 19th centuries. The film follows Browne and members of her extended family on journeys to Ghana and Cuba and into their own hearts and minds as they wrestled with how they continue to benefit from the buying, selling and labor of enslaved people.

In addition, dioceses created study guides, video programs and other resources for congregations to delve into their own histories and confront the legacies of racism and slavery. (According to Deputy Diane Pollard (New York), chair of the Social and Urban Affairs Committee, the presentations will be made available on the website of the Episcopal Church archives in the future.)

The idea of “reparations” for slavery is a sticking point for many people. However, reparations means more than money, according to a definition prepared by the Diocese of New York: “Reparations is the process to remember, repair, restore, reconcile and make amends for wrongs that can never be singularly reducible to monetary terms. The process of reparations is an historical reckoning involving acknowledgement that an offense against humanity was committed and that the victims have not received justice.”