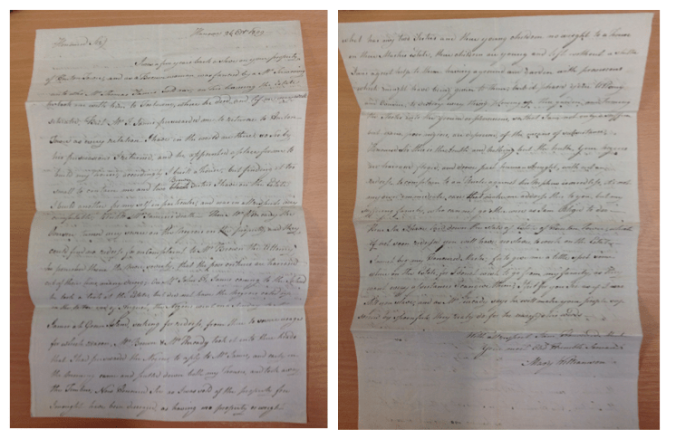 “In her letter, Mary Williamson briefly recounts her life. She explains that after the death of Mr Tumoning, who had bought her and freed her, she moved back to the estate of her former owner so as to be close to her family. In particular, she wanted to be close to her two sisters and their young children. The reason she writes is to ask for a piece of land to provide her with security in a context where the managers of the estate have vindictively turned against her. They have pulled down her house and the one that she built for her sisters, she says, and have also ploughed up her provision grounds, on which she previously grew food that supported not only herself but also her family members. If she does not receive land, she will be forced to move away from the estate, leaving her family behind.

“Mary Williamson’s letter is written in a beautiful hand and phrased in a way that suggests familiarity with rhetorical conventions, but reveals a story of the brutality of Caribbean slavery: of the arbitrary authority of plantation managers who might suddenly ‘turn very severe’; of those managers’ near complete power over the lives not only of enslaved people but also of those who had become free; and of a world in which male sexual attraction led to a woman being sold to the man who ‘fancied’ her, with no apparent consideration of her views. Perhaps most striking about the letter, though, is the relationship of mutual care and support that it reveals between Mary Williamson and her sisters. This aspect of the history of slavery has been largely neglected by historians…”