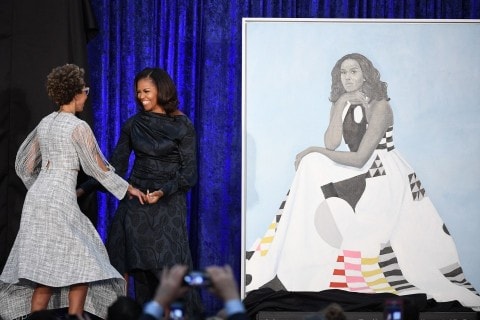 “These two images of Obama’s exposed arms bring history — that of black women and the White House — full circle. Images of black women in that iconic place have, since the nation’s founding, provoked questions about the character of our body politic. Understanding how such representations are crafted and received sheds light on changing ideas about who can represent the nation and on what terms. Obama’s latest image is no exception. It is a bold assertion of political power and equality, even as America remains burdened with racism and sexism.

“In the nation’s infancy, images of enslaved women in the White House — people bound to presidents by law and the lash — provoked questions about the terms of the founding bargain. Ona Judge escaped from President George Washington in the 1790s, and we can “see” her in the text of a runaway slave advertisement: “a light Mulatto girl, much freckled, with very black eyes, and bushy black hair. She is of middle stature, but slender and delicately made, about 20 years of age.” Washington never caught Judge, despite a years-long effort to do so. Her image, that of an enslaved woman having “absconded from the household of the President of the United States,” rejected the terms of a national compromise that paired the ideal of liberty for some with the fact of human bondage for others…”