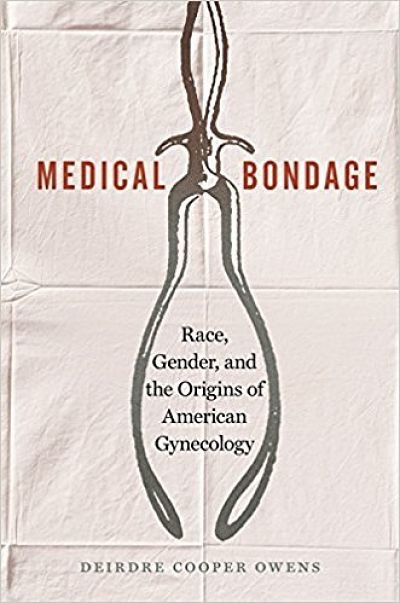 “The accomplishments of pioneering doctors such as John Peter Mettauer, James Marion Sims, and Nathan Bozeman are well documented. It is also no secret that these nineteenth-century gynecologists performed experimental caesarean sections, ovariotomies, and obstetric stulae repairs primarily on poor and powerless women. Medical Bondage breaks new ground by exploring how and why physicians denied these women their full humanity yet valued them as “medical superbodies” highly suited for medical experimentation.

“In Medical Bondage, Cooper Owens examines a wide range of scientific literature and less formal communications in which gynecologists created and disseminated medical fictions about their patients, such as their belief that black enslaved women could withstand pain better than white “ladies.” Even as they were advancing medicine, these doctors were legitimizing, for decades to come, groundless theories related to whiteness and blackness, men and women, and the inferiority of other races or nationalities. Medical Bondage moves between southern plantations and northern urban centers to reveal how nineteenth-century American ideas about race, health, and status influenced doctor-patient relationships in sites of healing like slave cabins, medical colleges, and hospitals. It also retells the story of black enslaved women and of Irish immigrant women from the perspective of these exploited groups and thus restores for us a picture of their lives.”