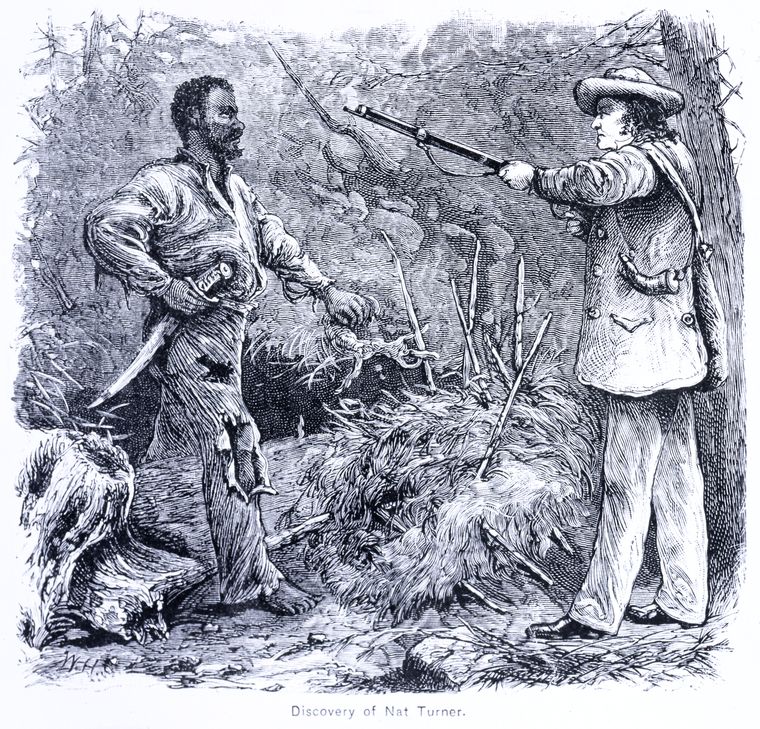 August 21st marks the start of the Southampton revolt. On this day, Nat Turner and other enslaved rebels met to plan their revolt. The revolt itself began the next day (August 22) and lasted less than 48 hours.

Read on for the 1831 report from the Richmond Enquirer:

So much curiosity has been excited in the state, and so much exaggeration will go abroad, that we have determined to devote a great portion of this day’s paper to the strange events in the county of Southampton…. What strikes us as the most remarkable thing in this matter is the horrible ferocity of these monsters. They remind one of a parcel of blood-thirsty wolves rushing down from the Alps; or rather like a former incursion of the Indians upon the white settlements’ Nothings is spared; neither age nor sex is respected-the helplessness of women and children pleads in vain for mercy. The danger is thought to be over-but prudence still demands precaution. The lower country should be on the alert.-The case of Nat Turner warns us. No black man ought to be permitted to turn a Preacher through the country. The law must be enforced or the tragedy of Southampton appeals to us in vain.

The oldest inhabitants of our county have never experienced such a distressing time, as we have had since Sunday night last. The negroes, about fifteen miles from this place, have massacred from 50 to 75 women and children, and some 8 or 10 men. Every house, room and corner in this place is full of women and children, driven from home, who had to take the woods, until they could get to this place. We are worn out with fatigue.
A fanatic preacher by the name of Nat Turner (Gen. Nat Turner) who had been taught to read and write, and permitted to go about preaching in the country, was at the bottom of this infernal brigandage. He was artful, impudent and vindicative, without any cause or provocation, that could be assigned.-He was the slave of Mr. Travis. He and another slave of Mr. T. a young fellow, by the name of Moore, were two of the leaders. Three or four others were first concerned and most active.–

They had 15 others to join them. And by importunity or threats they prevailed upon about 20 others to cooperate in the scheme of massacre. We cannot say how long they were organizing themselves-but they turned out on last Monday early (the 22d) upon their nefarious expedition…. They were mounted to the number of 40 or 50; and with knives and axes-knocking on the head, or cutting the throats of their victims. They had few firearms among them-and scarcely one, if one, was fit for use…. But as they went from house to house, they drank ardent spirits-and it is supposed, that in consequence of their being intoxicated,-or from mere fatigue, they paused in their murderous career about 12 o’clock on Monday.
A fact or two, before we continue our narrative. These wretches are now estimated to have committed sixty-one murders! Not a white person escaped at all the houses they visited except two. One was a little child at Mrs. Waller’s, about 7 or 8 years of age, who had sagacity enough to Creep up a chimney; and the other was Mrs. Barrow, whose husband was murdered in his cotton patch, though he had received some notice in the course of the morning of the murderous deeds that were going on; but placed no confidence in the story and fell victim to his incredulty. His wife bid herself between weather-boarding, and the unplastered lathing, and escaped, the wretches not taking time to hunt her out. It was believed that one of the brigands had taken up a spit against Mr. Barrow, because he had refused him one of his female slaves for a wife.
Early on Tuesday morning, they attempted to renew their bloody work.They made an attack upon Mr. Blunt, a gentleman who was very unwell with the gout, and who instead of flying determined to brave them out. He had several pieces of firearms, perhaps seven or eight, and he put them into the hands of his own slaves, who nobly and gallantly stood by him. They repelled the brigands-killed one, wounded and took prisoner (Gen. Moore), and we believe took a third who was not wounded at all….
The militia of Southampton had been most active in ferreting out the fugitives from their hiding places…. But it deserves to be said to the credit of many of the slaves whom gratitude had bound to their masters, that they had manifested the greatest alacrity in detecting and apprehending many of the brigands. They had brought in several and a fine spirit had been shown in many of the plantations of confidence on the part of the masters, and gratitude on that of the slaves. It is said that from 40 to 50 blacks were in jail-some of whom were known to be concerned with the murders, and others suspected. The courts will discriminate the innocent from the guilty.
It is believed that all the brigands were slaves-and most, if not all these, the property of kind and indulgent masters. It is not known that any of them had been the runaways of the swamps and only one of them was a free man of color. He had afterwards returned to his own house, and a party sent there to apprehend him. He was accidently seen concealed in his yard and shot….
Nat, the ringleader, who calls himself General, pretends to be a Baptist preachers great enthusiast-declares to his comrades that he is commissioned by Jesus Christ, and proceeds under his inspired directions-tliat the late singular appearance of the sun was the sign for him, etc., etc., is among the number not yet taken. The story of his having been killed at the bridge, and of two engagements there, is ungrounded. It is believed he cannot escape.
The General [i.e., General Broadnax, the militia commander in Greensville County] is convinced, from various sources of information, that there existed no general concert among the slaves.-Circumstances impossible to have been feigned, demon-

strate the entire ignorance on the subject of all the slaves in the counties around Southampton, among whom he has never known more pefect order and quiet to prevail.

Reprinted from Henry Irving Tragle’s The Southampton Slave Revolt of 1831: A Compilation of Source Material, by Henry I. Tragle, Amherst: University of Massachusetts Press, 1971.