via Indiana U Press: 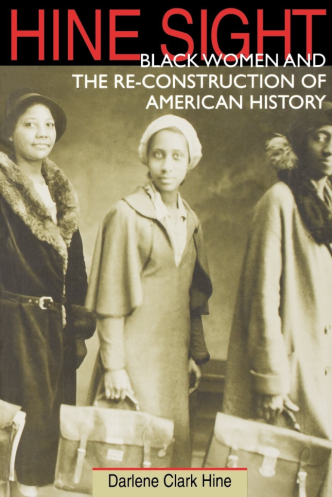 “The history of African American women has become an important topic in the intellectual life of this country in the last fifteen years; and Darlene Clark Hine has been one of those most responsible for bringing the subject to its current level of importance.” —from the Foreword by John Hope Franklin

“In this absolutely needed collection of essays by one of the leading American historians of our generation, the richly intertwined community-making and self-making that shaped the historical experience of African American women shines out like a beacon.” —Susan M. Reverby, Luella LaMer Associate Professor for Women’s Studies, Wellesley College

Darlene Clark Hine is a leading historian of the African American experience who helped found the field of black women’s history and has been one of its most prolific scholars. A past-president of the Organization of American Historians and the Southern Historical Association and the winner of numerous honors and awards, she is the Board of Trustees Professor of African American Studies and History at Northwestern. Her numerous publications includeThe African-American Odyssey, Black Victory: The Rise and Fall of the White Primary in Texas, Black Women in White: Racial Conflict and Cooperation in the Nursing Profession, 1890-1950, The Harvard Guide to American History, Hine Sight: Black Women and the Re-Construction of American History, More Than Chattel: Black Women and Slavery in the Americas, A Question of Manhood: A Reader in U.S. Black Men’s History and Masculinity, A Shining Thread of Hope: The History of Black Women in America, Speak Truth to Power: Black Professional Class in United States History, and “We Specialize in the Wholly Impossible”: A Reader in Black Women’s History. She has been awarded fellowships and grants by the American Council of Learned Societies, the Center for Advanced Study in the Behavioral Sciences, the Ford Foundation, the National Endowment for the Humanities, the National Humanities Center, the Radcliffe Institute for Advanced Study, and the Rockefeller Foundation.