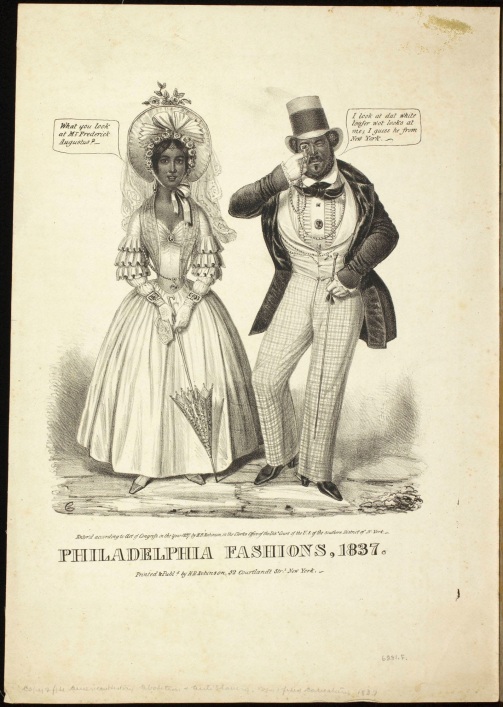 “The invitation to participate in a roundtable discussion on the early republic produced some confusion—what did I know about the history of African American women in the early republic? The hesitancy wasn’t logical, but grew from the fact that I rarely periodize the women I study and about whom I am most familiar with the framing “early republic.” Although my research is primarily on race and gender in the early Modern Atlantic world, I certainly see myself as a scholar of gender and slavery, and I regularly teach and read on slavery through (and when forced, beyond) the period of the Civil War. Instead of early republic, I tend to characterize my teaching and work as falling under the periodizing rubric of early Atlantic, or colonial, or antebellum, or eighteenth century, or Civil War, but not early republic. And thus, the confusion. Still the explanation begs a question: Why don’t I use this frame? It turns out I am not the only one.

“According to the Society for Historians of the Early American Republic and the Journal of the Early Republic, studying the early republic signals something different from studying the early Atlantic world or the antebellum period. It frames social history with the distinct political reality of the emergence of a new nation–state, a situation that is at the core [End Page 351] of African American life both in this time period and, arguably, much earlier. Despite the fact that the early republic extends from 1781 to 1861, a search in JSTOR for recent journal articles published on black women in the early republic came up surprisingly thin. What began with JSTOR and ended with an examination of every issue of the JER from the past decade yielded very few results. I found myself in that most frustrating and energizing situation, one familiar to graduate students—and began reworking my search terms over and over. Yet no matter how I sequenced or parsed “Slave,” “Race,” “Gender OR Women,” and “Early Republic,” the terms left me with a bibliography barely three pages long and a lot of questions about how to explain the omission. Given what I know about the growth of the field of the history of African American women in slavery, it obviously isn’t the case that a mere twenty-four articles have been written in the past ten years about black women’s lives in this period. Clearly, something about the rubric doesn’t fit, resulting in a problem of periodization that both secures an imaginary space of ungendered and de-racinated clarity on the one hand, and that situates scholars like myself in academic and, apparently, chronological isolation on the other. In that space we seem to occupy a thrilling, if slightly delusional, sense of saturated transformation. There we find an explosion of archivally rich and theoretically prescient work on the lives of black women in the decades encompassed by the idea of the early republic, so much so that one imagines briefly that the arguments that black women’s lives must be centered in examinations of these decades no longer needs to be mounted. However, in that place of African American women’s history, and of gender and slavery studies, you can’t talk about foundational moments in the American past without firmly situating the dispossessed and the ongoing problem of dispossession….”

Read more: Project MUSE – Periodization Problems: Race and Gender in the History of the Early Republic