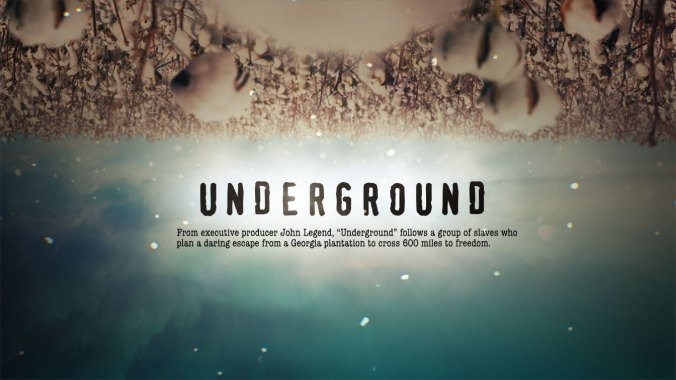 “Every Wednesday for the past month, Twitter has lit up with comments about the new television hit Underground on WGN America. Thousands of people live tweet, reacting to the drama of a slave escape plot. Viewers discuss the music, the interactions among a complex set of characters, and the history of American slavery. Historians, too, are part of these conversations. Kelli Carter Jackson (@kcarterjackson) tweeted “Who saw #Underground last night?! … Edge of my seat!” while Leslie Harris (@ProfLMH) and other scholars, including Evelyn Brooks Higginbotham, president of the Association for the Study of African American Life and History, went to an early screening at the White House. Harris thanked the actors and producers on Twitter “for bringing our history to life.” Erica Armstrong Dunbar (@EADunbar1) weighed in early on in an earlier OAH Blog…

“As a scholar of the enslaved and someone who studies slavery, I was not sure if a made-for-television modern story of runaways would fully capture the depth of characters who populated plantations across the South. Just like nineteenth-century enslaved experiences on plantations, this show depicts the diversity and complexity of enslavement. After five episodes, it is clear to me that the producers and actors worked hard to present the institution of slavery through multiple characters and perspectives, including field hands, drivers, blacksmiths, house servants, carpenters, overseers, slave patrollers, black and white abolitionists, as well as the plantation gentry. They also do justice to gender and class distinctions, sometimes with humor, irony, and humiliation….”