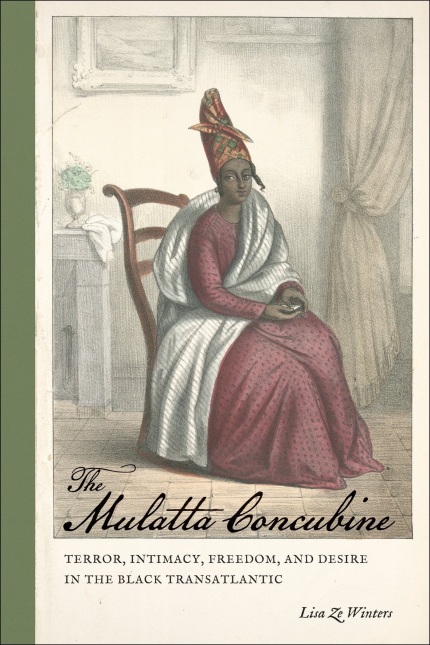 “Popular and academic representations of the free mulatta concubine repeatedly depict women of mixed black African and white racial descent as defined by their sexual attachment to white men, and thus they offer evidence of the means to and dimensions of their freedom within Atlantic slave societies. In The Mulatta Concubine, Lisa Ze Winters contends that the uniformity of these representations conceals the figure’s centrality to the practices and production of diaspora.Beginning with a meditation on what captive black subjects may have seen and remembered when encountering free women of color living in slave ports, the book traces the echo of the free mulatta concubine across the physical and imaginative landscapes of three Atlantic sites: Gorée Island, New Orleans, and Saint Domingue (Haiti). Ze Winters mines an archive that includes a 1789 political petition by free men of color, a 1737 letter by a free black mother on behalf of her daughter, antebellum newspaper reports, travelers’ narratives, ethnographies, and Haitian Vodou iconography. Attentive to the tenuousness of freedom, Ze Winters argues that the concubine figure’s manifestation as both historical subject and African diasporic goddess indicates her centrality to understanding how free and enslaved black subjects performed gender, theorized race and freedom, and produced their own diasporic identities.”

2 thoughts on “BOOK: Winters on the Mulatta Concubine in History and Memory”