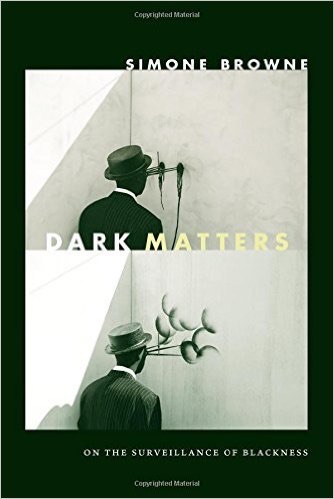 “In Dark Matters Simone Browne locates the conditions of blackness as a key site through which surveillance is practiced, narrated, and resisted. She shows how contemporary surveillance technologies and practices are informed by the long history of racial formation and by the methods of policing black life under slavery, such as branding, runaway slave notices, and lantern laws. Placing surveillance studies into conversation with the archive of transatlantic slavery and its afterlife, Browne draws from black feminist theory, sociology, and cultural studies to analyze texts as diverse as the methods of surveilling blackness she discusses: from the design of the eighteenth-century slave ship Brooks, Jeremy Bentham’s Panopticon, and The Book of Negroes, to contemporary art, literature, biometrics, and post-9/11 airport security practices. Surveillance, Browne asserts, is both a discursive and material practice that reifies boundaries, borders, and bodies around racial lines, so much so that the surveillance of blackness has long been, and continues to be, a social and political norm.”

One thought on “BOOK: Browne on Slavery, Surveillance and other Dark Matters”