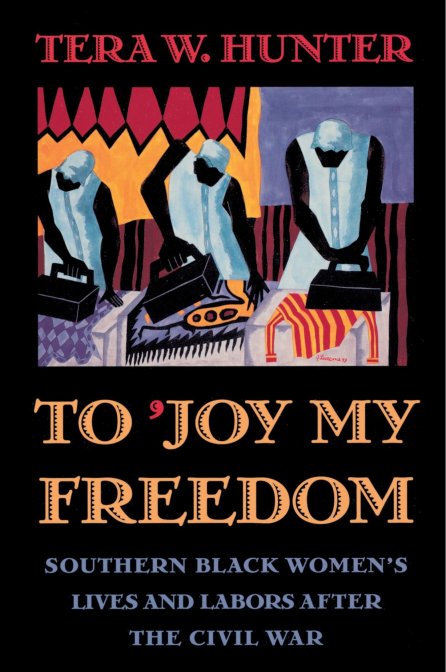 “As the Civil War drew to a close, newly emancipated black women workers made their way to Atlanta—the economic hub of the newly emerging urban and industrial south—in order to build an independent and free life on the rubble of their enslaved past. In an original and dramatic work of scholarship, Tera Hunter traces their lives in the postbellum era and reveals the centrality of their labors to the African-American struggle for freedom and justice. Household laborers and washerwomen were constrained by their employers’ domestic worlds but constructed their own world of work, play, negotiation, resistance, and community organization.

Hunter follows African-American working women from their newfound optimism and hope at the end of the Civil War to their struggles as free domestic laborers in the homes of their former masters. We witness their drive as they build neighborhoods and networks and their energy as they enjoy leisure hours in dance halls and clubs. We learn of their militance and the way they resisted efforts to keep them economically depressed and medically victimized. Finally, we understand the despair and defeat provoked by Jim Crow laws and segregation and how they spurred large numbers of black laboring women to migrate north.

Hunter weaves a rich and diverse tapestry of the culture and experience of black women workers in the post–Civil War south. Through anecdote and data, analysis and interpretation, she manages to penetrate African-American life and labor and to reveal the centrality of women at the inception—and at the heart—of the new south.”