Demonstrators display signs during a protest on West Florissant Avenue in Ferguson, Missouri on August 18, 2014. Police fired tear gas in another night of unrest in a Missouri town where a white police officer shot and killed an unarmed black teenager, just hours after President Barack Obama called for calm. AFP PHOTO / Michael B. Thomas (Photo credit should read Michael B. Thomas/AFP/Getty Images)

There have been violent protests against the police in Ferguson, Missouri, for more than a week, since police shot and killed an unarmed black teenager named Michael Brown.

An African-American professor watching the situation sees a link between what’s happening in Missouri today and what happened in the state in the 1800s when it was at the center of the national debate and divide over slavery.

Blair Kelley, who teaches history at North Carolina State University, finds parallels between Michael Brown and Dred Scott, a slave who sued for his freedom and ultimately lost his case in the U.S. Supreme Court in 1857. 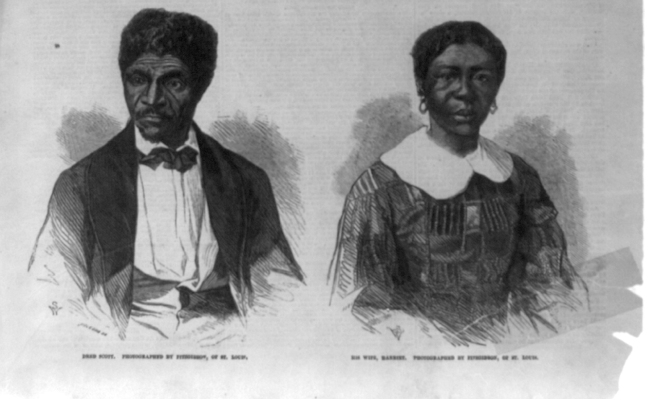 These engravings of Scott, his wife, Harriet Robinson Scott, and their two daughters, Eliza and Lizzie, were printed on the front page of Frank Leslie’s Illustrated Newspaper on June 27, 1857, accompanying an article about Scott and his life since the Supreme Court decision via http://www.virginiamemory.com/online_classroom/shaping_the_constitution/doc/dred_scott

The ruling basically said that African-Americans, free or slave, could not be American citizens, and therefore had no standing to sue in federal court.