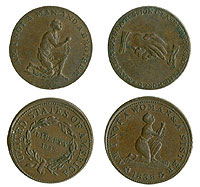 Inspired by conscience and guided by principle, abolitionists took a moral stand against slavery that produced one of America’s greatest victories for democracy. Through decades of strife, and often at the risk of their lives, anti-slavery activists remained steadfast in the face of powerful opposition. Their efforts would ultimately force the issue of slavery to the forefront of national politics, and fuel the split between North and South that would lead the country into civil war.

On display from June 5 through September 27, 2003, “Abolitionism in America” documents our country’s intellectual, moral, and political struggle to achieve freedom for all Americans. Featuring rare books, manuscripts, letters, photographs, and other materials from Cornell’s pre-eminent anti-slavery and Civil War collections, the exhibition explores the complex history of slavery, resistance, and abolition from the 1700s through 1865. The exhibition offers a rare opportunity to view some of Cornell Library’s greatest treasures, including a manuscript copy of the Gettysburg Address written by Abraham Lincoln, a manuscript copy of the Emancipation Proclamation, and a copy of the 13th Amendment signed by Lincoln and members of Congress.

Curated by Petrina Jackson and Katherine Reagan. View the exhibit here: “I will be heard!” Abolitionism in America

Image Credits: Featured: Frederick County, Maryland, Court Document. Slave Purchased and Freed by her Mother, 1831. This document alludes to the poignant story of Nancy Richardson, a mother who worked diligently and ultimately purchased freedom for her enslaved daughter, Floria Barnes. This testimony legally certifies that “Floria Barnes a negro woman now before me is the identical negro woman who was heretofore purchased by her mother Nancy Richardson, and who was by the Said Nancy Richardson, manumitted and set free…” Cornell University, Gift of Gail ’56 and Stephen Rudin; Image: Anti-Slavery Tokens, 1838. “These United States issued copper tokens feature Josiah Wedgwood’s famous image of a shackled and kneeling slave, with anti-slavery sentiments on the reverse side.” Cornell University, William P. Stein Memorial Endowment. Both images as seen on “I Will Be Heard.”

One thought on “DIGITAL/EXHIBIT: “I will be heard!” Abolitionism in America (Cornell U)”