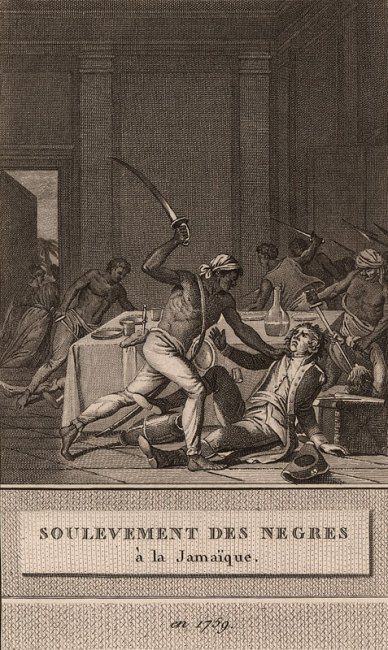 This animated thematic map narrates the spatial history of the greatest slave insurrection in the eighteenth century British Empire.  To teachers and researchers, the presentation offers a carefully curated archive of key documentary evidence.  To all viewers, the map suggests an argument about the strategies of the rebels and the tactics of counterinsurgency, about the importance of the landscape to the course of the uprising, and about the difficulty of representing such events cartographically with available sources.  Although this cartographic narration cannot be taken as an exhaustive database—for instance, it does not examine major themes such as belonging and affiliation among the insurgents or the larger imperial context and interconnected Atlantic world— the map offers an illuminating interpretation of the military campaign’s spatial dynamics….

….Mapping the great Jamaican insurrection of 1760-61 allows us to see how the island’s topography shaped the course of the revolt, how the rebellion included at least three major uprisings, and how its suppression required the sequenced collaboration of several distinct elements of British military power.  From the cartographic evidence, it appears that the insurrection was in fact a well-planned affair that posed a genuine strategic threat, checked ultimately by an effective counterinsurgency.  Yet if the map draws a clearer picture of the extent and contours of the insurrection, it cannot convey the ambition, hope, desperation, shock, dread, alarm, cruelty, bloodlust, and sheer mayhem of the experience.  These are matters left to the historical imagination of viewers and readers.

In 1760, some fifteen hundred enslaved black men and women— perhaps fewer but probably many more— took advantage of Britain’s Seven Year’s War against France and Spain, to stage a massive uprising in Jamaica, which began on April 7 in the windward parish of St. Mary’s and continued in the leeward parishes until October of the next year.  Over the course of eighteen months the rebels killed as many as sixty whites and destroyed many thousands of pounds worth of property.  During the suppression of the revolt over five hundred black men and women were killed in battle, executed, or committed suicide.  Another 500 were transported from the island for life.  Colonists valued the total cost to the island at nearly a quarter of a million pounds. “Whether we consider the extent and secrecy of its plan, the multitude of the conspirators, and the difficulty of opposing its eruptions in such a variety of places at once,” wrote planter-historian Edward Long in his 1774 History of Jamaica, this revolt was “more formidable than any hitherto known in the West Indies.”[1]