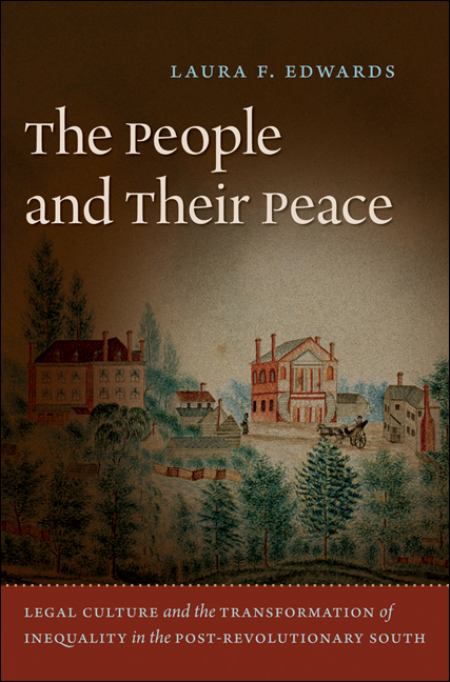 Laura F. Edwards. The People and Their Peace: Legal Culture and the Transformation of Inequality in the Post-revolutionary South. Chapel Hill: University of North Carolina Press, 2009.

In the half-century following the Revolutionary War, the logic of inequality underwent a profound transformation within the southern legal system. Drawing on extensive archival research in North and South Carolina, Laura F. Edwards illuminates those changes by revealing the importance of localized legal practice.

Edwards shows that following the Revolution, the intensely local legal system favored maintaining the “peace,” a concept intended to protect the social order and its patriarchal hierarchies. Ordinary people, rather than legal professionals and political leaders, were central to its workings. Those without rights–even slaves–had influence within the system because of their positions of subordination, not in spite of them. By the 1830s, however, state leaders had secured support for a more centralized system that excluded people who were not specifically granted individual rights, including women, African Americans, and the poor. Edwards concludes that the emphasis on rights affirmed and restructured existing patriarchal inequalities, giving them new life within state law with implications that affected all Americans.

Placing slaves, free blacks, and white women at the center of the story, The People and Their Peace recasts traditional narratives of legal and political change and sheds light on key issues in U.S. history, including the persistence of inequality–particularly slavery–in the face of expanding democracy.