via University of North Carolina Press: 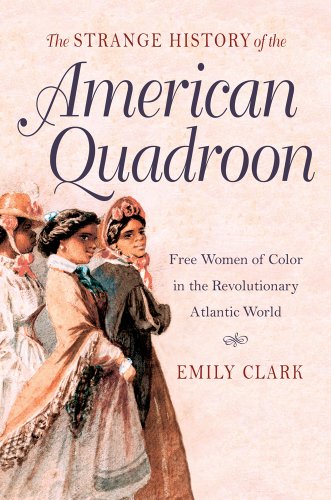 Exotic, seductive, and doomed: the antebellum mixed-race free woman of color has long operated as a metaphor for New Orleans. Commonly known as a “quadroon,” she and the city she represents rest irretrievably condemned in the popular historical imagination by the linked sins of slavery and interracial sex. However, as Emily Clark shows, the rich archives of New Orleans tell a different story. Free women of color with ancestral roots in New Orleans were as likely to marry in the 1820s as white women. And marriage, not concubinage, was the basis of their family structure. In The Strange History of the American Quadroon, Clark investigates how the narrative of the erotic colored mistress became an elaborate literary and commercial trope, persisting as a symbol that long outlived the political and cultural purposes for which it had been created. Untangling myth and memory, she presents a dramatically new and nuanced understanding of the myths and realities of New Orleans’s free women of color.