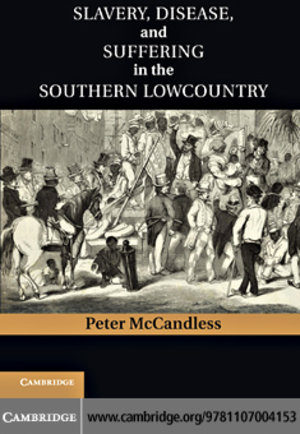 From Cambridge U Press:

On the eve of the Revolution, the Carolina lowcountry was the wealthiest and unhealthiest region in British North America. Slavery, Disease, and Suffering in the Southern Lowcountry argues that the two were intimately connected: both resulted largely from the dominance of rice cultivation on plantations using imported African slave labor. This development began in the coastal lands near Charleston, South Carolina, around the end of the seventeenth century. Rice plantations spread north to the Cape Fear region of North Carolina and south to Georgia and northeast Florida in the late colonial period. The book examines perceptions and realities of the lowcountry disease environment; how the lowcountry became notorious for its ‘tropical’ fevers, notably malaria and yellow fever; how people combated, avoided or perversely denied the suffering they caused; and how diseases and human responses to them influenced not only the lowcountry and the South, but the United States, even helping to secure American independence.