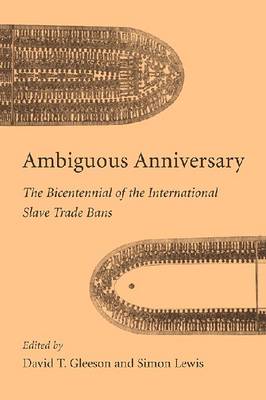 From University of South Carolina Press:

In March 1807, within a few weeks of each other, both the United States and the United Kingdom passed laws banning the international slave trade. Two hundred years later, Great Britain, an instigator of the slave trade and the chief source of slaves sold into continental North America, was awash nationwide in commemorations of the ban. By contrast the bicentennial
of the ban received almost no attention in the United States. Ambiguous Anniversary aims to remedy that omission and to explain the discrepancy between the two commemorative responses. Edited by David T. Gleeson and Simon Lewis, this volume examines the impact that closing the international slave trade in 1808 had on Southern American economics, politics,
and society.

Recasting the history of slavery in the early Republic and the memory of slavery and abolition in American culture, the foreword, introduction, and ten essays in this volume present a complex picture of an important but partial step in America’s long struggle toward the ambitious but ambiguous goal of liberty and justice for all….